Modpack from DRAUG — it is a minimalist assembly only the most relevant, useful prohibited and official mods.

The biggest advantage of modpacks is its versatility because only modpacks includes all the most necessary modifications, from the sights and panel damage ending zoom mods.

The DRAUG modpack peculiarity is its minimalism. The assembly includes both official and prohibited or so-called cheat mods. Among legal mods are:
— The Superior Standard Sight
— Damage log and blocked by armor
— Marker nearby enemies
— Sniper zoom 16…

Among the forbidden:
— A popular sight Tundra
— Sniper mode in arty
— The destruction of the enemies of the objects displayed on the mini map
— Charge over enemies… 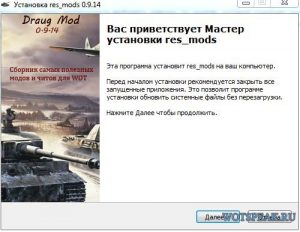